The loss of creative capacity as a source of organizational decline

Posted on April 13, 2011 by Philippe Silberzahn | Leave a comment

An interesting way to think about how organizations deal with disruptions in their environment, and what ultimately causes their demise, is to consider the thesis of Arnold J Toynbee on the decline of civilizations and apply it to the world of organizations.

Toynbee is the author of “A study in history“, the landmark book on the history of civilizations. The book comprises 6,000 pages, no less. Fortunately, a professor decided to write an abridged version, which allows normal people like you and me to grasp the virtuosity and knowledge of Toynbee in only… 1,200 pages in two volumes. What does Toynbee write? According to him, a civilization grows when its elite is creative enough to attract inside and outside constituents. The civilization breaks down when the elite loses this creative capacity and gives way to, or transforms itself into, a dominant minority. When this happens, the driver of the civilization becomes control, not attraction, and its unity ends.

Interestingly, Toynbee observes that the consequences of the breakdown are not felt immediately. The civilization can continue to exist and keep a momentum if only because the logic of control brings an overall efficiency in its working. To summarize, the three key points of Toynbee’s thesis are:

It is tempting to try to apply Toynbee’s thesis to the corporate environment. In doing so, we can define the creative capacity as the ability to successfully create and introduce new products and services (renew its engine of growth). We can define growth in terms of overall economic performance.

With this in mind, let’s map a few companies on a two-by-two diagram as represented below: 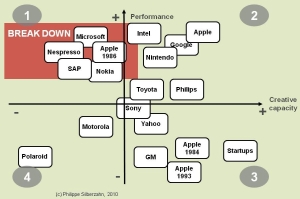 Area #3 represents firms that are creative, but non performing. This can typically be startups not yet in the growth phase. This can also be older firms such as the Xerox PARC in the 70s. Area#2 represents firms that are creative and performing at the same time, the ideal situation. Area#4 represent the lost causes, such as Polaroid. Area#1 is the one we are interested in: it represents firms that are not creative yet that are (still) performing. Here we find for instance Microsoft, which still produces astonishing profits yet whose new products such as XBox or MSN have all been failures (most are structurally loss making are survive only because old cash cows such as Office and Windows, dating back to the 1990s, subsidize them).

The second point of Toynbee’s thesis concerns the delay that exists between the breakdown and its effects. What, for instance, is the cause of General Motors’ bankruptcy in 2009? Clearly, this comes at the end of a long decline that visibly started back in the early 1970s. It could be the entry and success of the Japanese cars in the US at that time. But we suspect this would be more the symptom than the cause. In fact, some researchers (Santos, Spector and Van der Heyden) attribute GM’s breakdown to a decision made by its new CEO back in… 1958. That year, the divisional managers of the company stopped being part of the company’s policy (ie executive) committee. This marked the end of the interweaving between strategy and operation. From then on, the disconnect between the two grew: strategy became increasingly detached from the field, while operations only sat at the receiving end of decisions made “upstairs”. Instead of being fully engaged in policy decisions, divisional managers were told what to do and how to do it.  The control by head office was even accentuated in 1965. This is the time when GM opened the door first to Volkswagen, then to the Japanese, and started experiencing product flops such as the Vega.

The third point of Toynbee’s thesis concerns the transformation of the elite from a creative to a dominant minority. Any growing organization must put in place management systems if it wants to avoid chaos, and to ensure proper performance. However, these systems gradually rigidify the management of the firm. Things that were done informally when the firm was still small and entrepreneurial now require planning and approval. Installing a resource planning system such as SAP only reinforces this trend. In parallel, the firm recruits managers able to run these management systems. These are not entrepreneurs, but more administrators. Quite logically, they are graduates from business school’s MBA programs, the A in MBA standing for “Administration” indeed. On the institutional level, the firm, especially when it becomes a public company on a stock market, becomes increasingly sensitive to institutional pressures. Financial analysts, but also investment bankers, lawyers, industry experts and management gurus all begin to exert growing influence on the thinking and actions of the management team at the expense of the old guard of engineers and entrepreneurs. Predictability, in finance, new products and development, becomes important.

There is no way a growing firm can avoid putting some of these management systems in place: growth and size must be managed with formal systems. The real question, of course, is how such systems can be implemented without asphyxiating innovation. Because when you have a radically new idea, it is often not possible to build a business case for it the way one does for an incremental project. I recently met with a senior manager of a mid-size high-tech company (3,000 people) who described me in details how the entrepreneurial spirit is disappearing: originally a science-based firm, innovation is no longer chaotic and random:  it is now properly driven by the business units which are duly reporting on the demands from customers. Any new business idea has to demonstrate (you read it right: demonstrate) profitability and return over a short period, and the company is now essentially driven by its six-sigma initiative. Creativity has given way to control, and this has been accompanied by corresponding changes at the top as well as at the middle-level of management. Needless to say, the company is doing very well on the stock market.

Of course, applying a theory from one field to another has always limitations, but Toynbee’s thesis applies fairly well to such case. We understand better how a company breaks down and why it doesn’t show immediately.

As the case suggests, the cause of the breakdown and of the loss of creative capacity somehow is to be sought in the people the company recruits, ie the decline is socially constructed. We  all know that it is accepted wisdom, and a wisdom taught in our business schools, that once a company starts growing, entrepreneurs must give way to experienced managers to take the company to the next level. While this may look like common sense, it is also the surest way for the creative team to give way to a dominant team. What the application of Toynbee’s thesis to the organization suggests, therefore, is in fact to question the governance and recruitment practices in our firms. What type of managers do we want if the necessary efficiency is not to kill innovation? Henry Mintzberg, one of the most respected management researchers, has long shared his skepticism on the issue. In “How productivity killed American enterprise“, he wrote: “An OECD report in 2005 noted a ‘significant decline’ in the intensity of American research and development. America built its economy on its capacity to innovate—to explore. American engineers had been admired throughout the world. By 2008, when the MBAs and financial types and lawyers had taken control of corporate America, so much of that exploration had metamorphosed into exploitation.“

This of course also touches on the question of management education. How can we train future managers to become creative agents rather than controlling agents in the firms they join? Most of today’s courses in the MBA programs are, implicitly or explicitly, based on a logic of control. Clayton Christensen, a leading expert in innovation, agrees with Mintzberg. According to him, the breakdown of Sony, not so long ago the poster child of innovation in consumer products and now a struggling follower, takes its source in the retirement of Akio Morita, its founder, in 1980. An engineer, Morita was replaced by armies of MBAs trained in deliberate marketing and management techniques. The last disruptive product Sony introduced was in the late seventies (The PlayStation was not planned but created by a lonely engineer). All its products ever since have been followers, with various levels of success and brilliance, but followers nonetheless. It is perhaps time to seriously think about the education, the selection and the recruitment of our firms’ managers.