Crafting Non-Predictive Strategy, Part II: Start with who you are

In the first part of this series, Milo and I examined the complexity of nonlinear environments and tried to show how, when confronted with such an environment, energy spent on a deep understanding of the present beats attempts at predicting the future.  Hence our call for a non-predictive approach to strategy.

Nonlinear systems can be found in nature, but they are particularly common and problematic when they involve human issues.  While such human nonlinear systems can display regularities over long time periods, most major political, economic and business issues are essentially nonlinear and permeated by social facts.  What such human-centered, nonlinear systems have in common but which is often overlooked is that one cannot deal with them as if they were natural science problems.  For one thing, and as we have argued in a recent Forbes article with the example of Usama bin Ladin, how you define the issue you’re dealing with depends on who you are.  This is also the reason that “genius” fails.

What a Caveman can Teach you about Strategy

Anyone who doubted how much effort Osama bin Laden put into shaping his public image might be surprised to learn that he was an enthusiastic user of ‘Just for Men’ to darken his graying beard.  But how does the usual picture of bin Laden fit with this idea of image control? Doesn’t a man who seemed to spend his time living in caves clutching weapons look distinctly like some sort of primitive ‘kook’, incapable of planning sophisticated attacks? As the late US diplomat Richard Holbrooke asked, “How can a man in a cave out-communicate the world’s leading communications society?” Because out-communicate us he certainly did.

The answer to Holbrooke’s question lies in how well bin Laden understood both his enemies and his admirers. Traditional Muslims, for example, do not associate caves with the undesirable or the primitive. Quite the contrary:  in the Islamic world, caves have often been considered holy places, and associated with miracles.  According to Islamic teaching, for example, Mohammad received his revelation in a cave, and caves are the ultimate source of the  “stalactite design” that occurs in many mosques.  The symbolism involved therefore worked in opposite directions depending on the identity of the observer:  precisely the same images that contributed to Westerners’ condescension of bin Laden contributed to some Muslims veneration of him.  Similarly, very few Western leaders tote guns around in public.  Not only did bin Laden do so, but his choice of an AKSU-74 instead of the more common AK-47 carried a special message to his followers.  In the Soviet/Afghan war, this particularly  compact weapon was only carried by Soviet helicopter and armored vehicle crews.  To Jihadi veterans it was a trophy that implied distinguished service, that said “I’m an authentic warrior” (even though bin Laden’s actual combat record was undistinguished).  In our forthcoming book, we demonstrate how such phenomenon (a sort of reverse mirror-imaging) helped distort the CIA’s and other Western analysts perception of bin Laden prior to 9/11, and thereby contributed to the strategic surprise of the attacks.  Features that detracted from his credibility in one audience added to it for another audience. 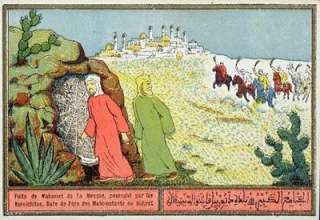 “Maybe we could find a strategy in here!”

In part Bin Laden’s future victims underestimated him because their identities filtered their perceptions.  Identity was also at work in analysis at the FBI. Former director Louis Freeh observes in his memoirs that because the FBI is a police organization, and therefore its role is to make a case and apprehend criminals, it saw bin Ladin as a criminal who needed to be prosecuted (backward looking), not as a warrior intent to destroy the US (forward-looking). Sadly, it took 9/11 to change this view.  This is why we say that strategic surprises are largely socially constructed, and this way of thinking applies to the business world, too.  Inevitably,  a firm’s identity and culture act as filters and frames, and  enable the organization – through its members – to make sense of its environment.  But these filters can also distort a company’s analysis and blind it to unexpected events.  This is not because the events in question are inherently unpredictable or unimaginable (indeed, they are often predicted and imagined by some), but because they do not fit the frame of corporate identity and culture.  In short, what you are surprised by depends in large part on who you are.

The corollary of this is that whether a new business opportunity is attractive or not also depends mainly on identity. In a major study of management failures, Harvard scholar Clayton Christensen found that incumbent leaders often did not find the opportunities created by disruptive technologies attractive. Why? Simply because they didn’t fit with their existing business model, and thus their identity as a firm. Take Kodak, for instance. This was a company that knew everything about digital disruption in the photo industry, because it had invented most of the technology behind it. But what Kodak couldn’t do was to bet big on digital, because it would run against its traditional business model. Any investment in digital meant less investment in film, which had always defined who Kodak was. And the results of that stubborn refusal to shift are all too well-known. To succeed in a given environment, a firm develops a business model that fits with this environment.  It defines a value proposition and a profit model implemented through resources, processes and values. How consistent these components are for a given environment determines how successful the firm will be in this environment.  These resources, processes and values (RPV) define who the firm is.  Together they constitute its identity and form the basis of it culture. It did not make sense for Digital Equipment to start PC manufacturing, for instance,  because minicomputers generated higher margins and were sold through highly trained and expensive direct sales force, while this sales force was of no use to sell cheap PCs.  In other words, it is not only your perception but also your strategy that depends on who you are.

Identity works in the other direction, too. Remember that famous picture of Sam Walton dancing around in a grass hula skirt and floral shirt in 1984? He looked stupid, and he knew it.  He also knew that it:  1) motivated his employees, and 2) invited derision from the competition.  Maybe that’s why in his “10 Rules for Successful Business” Walton wrote, “Think up your own stunt… it really fools competition. ‘Why should we take those cornballs at Wal-Mart seriously?’”.  As above, precisely the images that contributed to competitors’ condescension of Walton contributed to his target group’s veneration of him.  As other retailers discovered, belatedly, those “cornballs” at Walmart were as serious as a heart attack.

Ultimately, therefore, thinking about strategy must begin with thinking about your own culture and identity.  Always bear in mind that they will shape your perception, your choice of approach, and how that strategy gets implemented.   Their impact on the strategy making process is crucial, and it is important to recognize that this process is specific to each organization.  In short, strategy is ultimately a reflection of an organization’s identity and culture, and these must be the point of departure when considering strategic issues.

Your Character is Your Fate (and Your Strategy)

Heraclitus, the Greek philosopher said “Ethos anthropos daimon”:  “Your character is your fate”.  We would argue that your character is also your strategy, because the importance of identity goes way beyond simply defining what is attractive and what is not.  Individual and corporate character is often at the root of how strategy emerges in an organization.  Most business books cultivate a Cartesian vision of strategy that is created by the top management team or a CEO hero or a mathematical void, and communicated to the lower-echelon humans for mere implementation. In fact, strategy making rarely works like that.  In a landmark study, Stanford professor Robert Burgelman showed how, in fact, strategy is to a large extent the outcome of countless micro-decisions by operating and middle managers.  The crucial insight was that decisions are tied to the resource allocation process. Everyday, in their work, managers make decisions on how to allocate their scarce resources (time, energy, attention, money).  They choose certain tasks against others.  They call certain customers, and not others.  They advance some projects, not others.  They prioritize. The managers base those prioritizing decisions on the organizations’ explicit (identity) and implicit (cultural) values.  For instance, if the organization values customer relationships, they will call long time customers, even if those calls do not yield much. In a more profit-oriented organization, managers will ignore these customers and call the most promising ones.  Sometimes the values are not explicit: corporate strategy might decide to favor segment A, but if sales people find it more profitable for them to call segment B customers, they will do so.  If all sales people do the same, the firm eventually finds itself present in segment B rather than the planned segment A.  That is to say, the actual strategy emerges from the actions of the lower echelons and these actions are really the product of social mechanisms such as hiring, training, allocation and control processes, incentive systems, or even corporate customs. In short, the actual strategy is the result of what you do, and what you do is in large measure the result of who you are.  Often senior management eventually recognizes these emergent strategies instead of creating them.

Ultimately, therefore, thinking about strategy must begin with thinking about culture and identity.  They will shape your perception, your choice of strategies, and how that strategy gets implemented or go astray and take you where you didn’t want to go.  Their impact on the strategy making process is crucial, and it is important to recognize that this process is specific to each organization.  In short, strategy is ultimately a reflection of an organization’s identity and culture, and should be the central dimension when considering strategic issues.

See Part I of this series: Deep Understanding Beats Prediction, and Part II: Acknowledge the Nature of the Problem. If you enjoyed this post, please subscribe to our blog to receive future updates.

7 responses to “Crafting Non-Predictive Strategy, Part II: Start with who you are”