Start with Geostrategy, or call it Tactics

Many business people seem to operate under the unconscious assumption that they’ll gain a competitive advantage through a careful daily reading of the business press.  They won’t.  The same goes for fund managers seeking to generate “alpha”:  the business press alone certainly won’t get you there.

They’re also unlikely to gain a decisive edge by combining the daily parade of conventional economic data with stale “strategic” frameworks like the BCG Matrix (which dates back to 1968), Porter’s Five Forces (created in 1979), or Value Chain Analysis (introduced in 1985).   Anyone who has studied business in the last 30 years – including your competition – uses these.   They also probably read the same newspapers and buy the same economic data.   In short, the old-school “Business Strategy 101” toolkit is like a white shirt in your closet:  always safe, sometimes useful, but not a decisive business edge.   Face it:  apart from their other limitations (see below), these old strategy models are fully depreciated.  How is the unconsidered imitation of commonplace ideas “strategic”?

There is no clearer path towards creating a strategically autistic culture or organization than by mistaking the very definition of strategy.  That’s why to gain a competitive advantage in today’s world, you have to do more.  In my view, that “more” starts by gaining an understanding of what actually constitutes business strategy, i.e. understanding the deep, structural forces that bear on the long-term success of firms, and how these forces can be engaged and harnessed.  In the classes that I teach at IE, I argue that these deep forces are geopolitical.  The metaphor that I use to explain my approach is that geopolitics shapes the climate of business, whereas the daily news and conventional economics – even macroeconomics – simply address the weather of business.

What makes a truly strategic understanding of business hard to achieve is that much of what passes for corporate strategy is actually tactics.  The same goes for much of the advice dispensed by illustrious strategy consulting firms.  “Strategy” sounds more important than “tactics,” so everyone calls their analysis and recommendations strategy, and then moves on to dispensing advice.  What may sound like a linguistic quibble, however, is crucial because the distinction between these two words bears directly on how you think about building a source of sustainable advantage for your business.

As I related here, we get the word “strategy” from the Greek word strategos (στρατηγός), which has the literal meaning “army leader”.  In the Classical context, however, a strategos was someone who was both a military general and a civilian politician.  In other words, a strategos was expected to employ every aspect of power at his command in pursuit of victory.  He was charged with understanding and harnessing the full gamut of structural forces that affected his city-state’s future.  In contrast, the word “tactics”, comes from the Greek taktike (τακτική); it was a far more narrow term that encompassed only how an army was organized.

To return to today:  traditional business “strategy” largely grew out of Economics departments.  Like a general who thinks only of narrow military matters, economists almost by definition deal in market-based taktike; they treat the larger “rules of the game” as fixed, or at least outside of their purview.  They tend to call anything that disturbs the holy trinity of customers, competitors and suppliers or other market-based factors (e.g. NGOs, new regulations, or even an invention), an “exogenous factor”.  (Exogenous is another Greek word. It is used in Economics to mean “stuff we don’t want to talk about”).  But by taking deep structures for granted, and by assuming away numerous other natural and human factors, much of reality ends up outside a business model!

In my view, if you address only economically-defined market forces, you are by definition engaged in a tactical business discussion.  Sometimes that’s OK – tactics are important!  The problem is, calling tactics “strategy” keeps truly strategic matters from moving to the top of the business agenda while there is still time to craft a long-term response.

So where should one begin to think about strategy?  I suggest that strategic thinking should begin at the level of Geostrategy.  Geostrategy looks at how geopolitical factors inform, constrain, and affect business over the long term.

For convenience, you can place these geopolitical forces into four categories that interact, evolve and change over time:  Demographics, Geography, Technology, and Culture.  It is “climate change” at the level of these geopolitical forces – and especially the interaction among them – that create the economic and political “weather” of your firm.  They’re where true strategy begins.  Let’s briefly look at each. 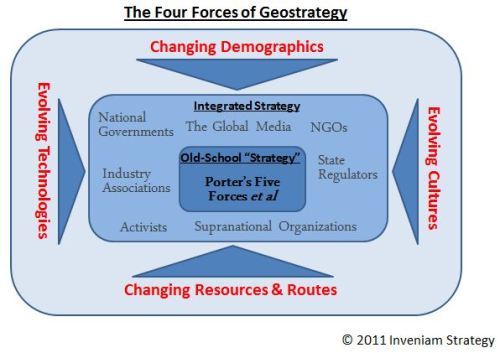 The Foundations of Lasting Strategy

Demographic change (i.e. shifts in human numbers, ages and location), affects the long term supply of human capital, influencing everything from labor and pension costs to the availability of creative people (a key component of what economists call Total Factor Productivity).  Many of the trends that marketing firms highlight (e.g. obesity, older consumers, etc.) can be traced back to demographic change.

Geography, the next factor, is not less important for being both pervasive and obvious. By geography, we mean simply the location of resources, and the routes between them and their consumers. Note, however, that “geography” defined in this manner isn’t fixed – the relative importance of different resources and routes shifts over time, and these shifts have economic impacts.  Actual climate change also has an impact on business, and is another reason that we speak of geography as a geostrategic “force” rather than as a constant.  If you’re not sure that this matters to your corporate strategy, ask yourself if energy and commodity prices have an impact on your firm.  If the answer’s yes, then ultimately changing resources and routes should inform your strategy.

The third factor, Technology, is a key and widely-recognized driver for many corporate strategies.  Technology is also one of the reasons why geography can be said to shift, as Technology changes the importance of locations and resources, and the routes between them.   Technology affects demography in unexpected ways, too.  “The Pill” is an obvious example, but how many people anticipated that a device originally developed in the 1950s to find cracks in ships’ hulls (ultrasound) would have a huge impact on the gender mix in Asia five decades later?

Technology also dramatically influences our fourth factor, Culture (including political culture).   People tend to think of culture as relatively fixed and technology as changing, but viewed decade by decade, cultural and political factors move rapidly and the business impact can be enormous.  Think of the recent “Arab Spring”, and then of the role that new social media played in it.  Now ask firms in the region how well traditional business strategy frameworks work to help them make sense of their current business issues!  Alternatively, consider the impact of national culture on business innovation, or even marketing.  Clearly, cultural shifts change economic patterns. As such, your strategies should link to them in sensible ways.

Integrated strategy – also known as non-market strategy – is where these four broad geostrategic factors intersect strategy at the level of the individual firm.  By considering actors beyond the traditional economics-based “market” and putting them into the core of a firm’s business model, Integrated Strategy operationalizes geostrategic factors. This is because non-market issues and actors are the structural “transmission belts” through which geopolitical factors have an effect on firms.  As demographics, geography, technology and cultures change and evolve, non-market actors – governments, NGOs, supranational regulators, etc. – enter a firm’s strategic environment and impact their long-term ability to create and retain value.  That is why the “toolkit” for doing Integrated Strategy draws upon ideas from sources as diverse as Political Science, Sociology, and even the Intelligence Community.  The relationship between Geostrategy, Integrated Strategy, and old-school strategy is illustrated below.

In short, to do lasting strategy, first consider trends in the four geostrategic forces enumerated above, and then formulate an Integrated Strategy that accounts for and engages the non-market issues and actors that embody those trends.  Anything else is tactics, and won’t endure.

16 responses to “Start with Geostrategy, or call it Tactics”